Served with the French service from 1953-1985, the AMX-13 is one the top light tanks ever produced. This light tank started lifespan with initial weight of 13 tones, and consequently was named AMX-13.
The tank was primarily designed to support army paratroopers by being air-portable vehicle. It featured a very compact design, with reliable chassis and advance toughening properties.

The body of the AMX-13 is made of all-welded steel and split into three sections. The driver is seated at left front, while engine is mounted at right to him with the differential in front of him. The turret positioned at the rear side of the vehicle body. As there are several variants of this AMX-13, the type of turret is set according to the different model of the tanks and the type armament which is fitted on the tank; however, all tanks are oscillating.

The AMX-13 suspension system consists of five road wheels, rubber coated, with a drive sprocket mounted at the front and the idler at the rear. There were later replaced by hydro-pneumatic suspension units. The track is supported by three or two return rollers which are mounted on the interior part of the track. The road wheels are equipped with hydraulic shock-absorbers. The steel track shoe is composed of 85 shoes per side and can be fitted with rubber pads if required.

TGL-SP Industries is specialized in manufacturing of complete track shoe assemblies for AMX-13 series and other combat vehicles for the defense forces. It can supply metal track shoes with or without the rubber pads, according to customer requirements.


Warning: Invalid argument supplied for foreach() in /var/www/vhosts/tgl-sp.com/httpdocs/wp-content/themes/tgl/taxonomy-tracked_vehicles.php on line 27 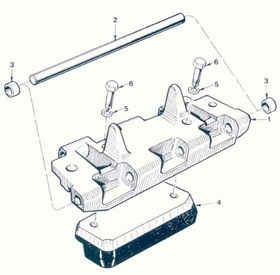